Before the turn of the century, Spring Lake Park was the main recreational spot of Hancock County Indiana. Family reunions, school picnics, and other large affairs were hosted on its banks. Its history follows:

The gem of Sugar Creek Township, Spring Lake, was originally a deep gully combining a number of natural springs. In 1884, William Dye, constructed a dam across it's west end and made it into an artificial lake. Known as Dye's Grove because of the beautifully wooded shores, it featured a passenger steamer able to carry about thirty persons. Employees of the Pan Handle Railroad Company picnicked here in 1886. In that same year, a camp meeting was held on its grounds which resulted in the organization of the congregation of Friends of Philadelphia. A sham battle was fought there, also in the 1880's.

In 1901, after the Indianapolis and Greenfield traction line had been built, a summer theater was opened and was maintained for two summers. Often, however, there were plenty of singers and actors present but no audience, so the venture was discontinued.

A baseball park was established in 1903, which proved popular and drew great crowds. E.E. Matthews was one of the owners of this park. Later, it was bought by a company of persons who platted it for residences in 1912. It was incorporated as a town in 1928. 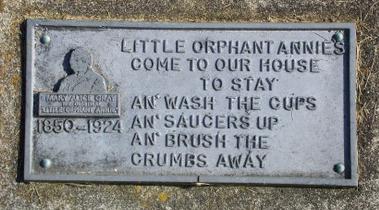 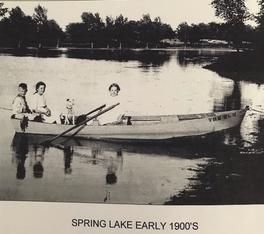 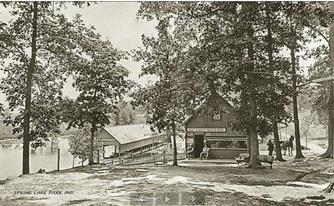 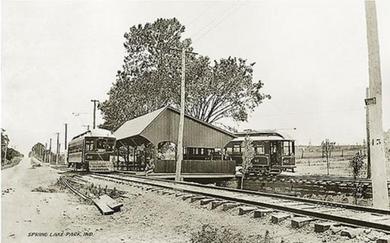 Trolly stop at Philadelphia circa 1900's, passengers would be taken by wagon to Spring Lake Park down what is now CR 250 West

A Brief History of Spring Lake: